“Conceal your intentions”, wrote American strategist Robert Greene in The 48 Laws of Power, “Keep people off balance and in the dark by never revealing the purpose behind your actions. If they have no clue what you are up to, they cannot prepare a defense. Guide them for enough down the wrong-path, envelop them in enough smoke, and by the time they realize your intentions, it will be too late.”

These words perhaps narrate a story about the success of news-channels in India. The country has been witnessing a media revolution ever-since 1987 when the state offered to bend from its controlled media and expose the country to private media. In the recent years however the competition has grown stiff.

News channels have mushroomed all over the country in English, Hindi and the regional languages. It has also given rise to news-casters and an increase in news-analysis over English news prime-time segment. While traditionally news-channels have been soft towards the government, the state domination seems to have relaxed to an extent over recent few years. At least to a common man’s eye. It however remains rare to see a journalist of spine face challenge in the spirit of the core values of journalism.

So...When a journalist of Assamese origin feels outraged and dares to ask tough questions on the most watched news-analysis show on Indian television, fellow editors feel uncomfortable, politicians grounded and anti-state actors question his national interest. The monopoly of the English TV media in India has faced a challenge in Arnab Goswami. 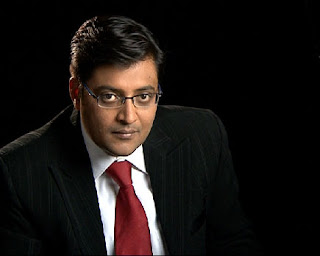 Goswami, claimed to be the most visible face on television in India today is loud and clear in his opinion and doesn’t conceal his intentions on live broadcast; instead he is quite direct in his arguments or agenda. For that very reason, he is an easy target among the critics and even the journalists. He has stood apart from the other two most visible faces and change-makers in English TV news – Rajdeep Sardesai and Barkha Dutt. Not merely because of his loud animated voice with an equally cheesy background score. The paradigm shift Goswami brought to the TV news approach is unquestionable. Yes, a thousand questions may be directed at him, in the nation-wants-to-know style but he won’t smell of a bias, least of all a political bias.

Activist turned stand-up comedian, Gursimran Khamba in his mild-sarcasm filled open letter to Arnab Goswami in 2010 wrote, “Your critics say, a one horned Rhino gets poached in Kaziranga every time you open your mouth on television. I say they are all jealous of your success.” Perhaps they are. Another reason being a letter Goswami wrote to his employees shortly after 2G scam surfaced in media and alleged tapes of Nirra Radia with well-reputed editors became public.

“This is a low point in the news business. It’s downright shameful,” wrote Goswami in an open letter to his employees, “We believe in fierce editorial independence and complete personal honesty. Our standards have to remain impeccably high. In your interactions at any level, remember that you are ambassadors of India’s number one news channel.”

“…no disrespect to the organization that you represent and the group that we are all a part of, no loose talk, no flexibility on values, will be accepted. If I hear of any, we will come down hard, and no exceptions will be made...,” he further wrote. The public letter took a stand amidst silence of almost the entire media in India. It surely would have given birth to foes with vengeance in mind. The ethics of the media however remain buried till date deep inside an ocean full of precarious silence.

The fancy power behind an editor today is immense, which often skids on way to success. It translates to insensitivity over issues of national importance. The scathing criticism of some editors over social networking websites has only increased over the recent years. Ignorance and above all arrogance would certainly not help in a situation as grave as this in the present significance of social media.

In India, news-channels have to now cross these infant years to a more important mature stage to lead a democracy out of its lacuna. It is imperative for media in general to have a collective conscience. Yes, certainly it’s hard in the times of corporate ownership of majority media.

'Remember, for a journalist, credibility is like virginity. You can lose it only once', veteran journalist Vinod Mehta wrote in his memoir, The Lucknow Boy. The notion of credibility has long lost its value in media. Indian media cannot be burdened with this responsibility alone till we have Rupert Murdoch who won’t let the sun set easy.

Till then at least, a ghost named Arnab Goswami will continue to haunt the power-breakers, with an intention which doesn’t hold a chance to be ignored by one and all.

Aditya Raj Kaul is the India Editor of the monthly The Indian published from Sydney, Australia. He can be reached at kauladityaraj@gmail.com
Posted by Aditya Raj Kaul at 2:37 AM

A great message ..
Thanks,
Vikash

I loved the article on Arnab, I do believe he is the only journo who has the guts to say it all & hold him in high esteem. I wish him all the best....

aditya, i well and truly agree with the lines where arnab has been marked as a threat to people involved in various scandles. Your article gives an opening to many brainees from where they need to come out of their corrupted dens.

Godo Article at least someone has guts to talk and talk straight ...

I am sure nation wants to know this too.. Nicely put.. great job..

Well it's unusually great to see a journalist, threatening the feudal mindset of politicians in the country.

Great article Aditya. Arnab does the guts to take on issues head on while all the other Rajdeeps and Prannoys indulge in bootlicking of politicians. Keep up the good work bro. :)

While I agree that arnab may not demonstrate any political bias, he has a moral bias that really does him in every time.

He asks you questions, but often in his debates he forgets that his job is to ask tough questions and then listen to the answers.

I was very disappointed with his panel discussion during the Anna hazare movement when he just cut a panelist down because she raised some important questions about the movement. At the time he may have wanted to be swept by the patriotic fervour and the imminent hazare victory against the government, but he completely forgot his job as an unbiased journalist. He helped other panelists mock and question the patriotism of a woman who simply had a different point of view.

His brand of activism, while good for putting politicians in a tough spot, is shockingly full of personal bias and views.

I agree he is not political biased like Barkha Dutt but in many of his debates, he tries to judge everything.When one is chairing a debate, he must be open to ideas and views from both sides and must not try to influence his thoughts on others.

What I might most disrespectful in his approach to news debates is his skewed approach to every issue. Saying out loud and blaming politicians for each and every thing is not the answer and frankly, it doesnt help either.

Rajdeep Sardesai scores much better in terms of true professionalism and Journalism compared to Arnab who has comes with pre-conceived notions in debates and tries to impose his views on others. And frankly Aditya, Its al about TRP's, I dont take any TV news anchor seriously. They are always after each other to score dirty points.

So, needless to say, anytime you mention what you look like, or the images of your profile on this post, I become momentarily stunned and confused to discover that you do not in fact look like me, even though I pictured you looking exactly the way I do for the past year or so of reading this blog because, again, you with the relatableness, ’tis your talent milady.Jaipur wedding planners

This is a an excellent review, All your reviews are great but here you reach closer, as you progress, to discovering the gem in the book. Your observations on writing are top-class, your descriptions subtle.
Business Transformation

I do not agree with the author. Like few people told here, Arnab do not have patience to listen to others. He just screams and shouts on top of his voice. Its really hilarious. Even people without blood pressure, will get blood pressure if they see any of this debates. He simply do not allow the panelists to talk. He is always OUTRAGED and the word OUTRAGE itself.All these TV news anchor have got hidden agenda, the TRP's.

PLEASE CLICK THE BELOW LINK TO KNOW MORE OF ARNAB

I do not agree with the author. Like few people told here, Arnab do not have patience to listen to others. He just screams and shouts on top of his voice. Its really hilarious. Even people without blood pressure, will get blood pressure if they see any of this debates. He simply do not allow the panelists to talk. He is always OUTRAGED and the word OUTRAGE itself.All these TV news anchor have got hidden agenda, the TRP's.

PLEASE CLICK THE BELOW LINK TO KNOW MORE OF ARNAB

Its really nice blog to get the information about Arnab Goswami.And I am very grateful to this blog for updating such a interview of celebrities.
Web Designing Companies | Website Development Companies

The article of this blog is really nice and everyone should know these information with the help of this blog.
Web Design Company Bangalore | Responsive Web Design Services