Muzzling the freedom of press

Sword of perception is being hurled as a mark, celebrating journalism of courage. The Indian media cold war is out in open with the giant-old  newspaper Indian Express, led by its editor-in-chief Shekhar Gupta and reporters Ritu Sarin, Pranab Dhal Samanta and Ajmer Singh threatening a defamation suit against Open Magazine editor-in-chief Manu Joseph, publisher R. Rajamohan, political editor Hartosh Singh Bal, Administrator Hamendra Singh and Editorial Chairman of Outlook Group Vinod Mehta for publishing an interview which severally criticized the much controversial story titled ‘The January night Raisina Hill was spooked: Two key Army units moved towards Delhi without notifying Govt’ reportedly suggesting an attempt towards Coup in India published on the 4th April. The notice by Indian Express, among other things goes on to say that, there was “no suggestion in the said news report of any coup attempt”. 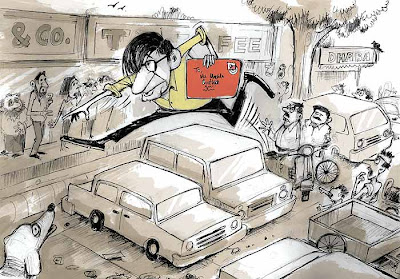 Is this a remote incident muzzling the freedom of press? Perhaps, it isn’t. But, not always does an editor object to an ‘opinion’ expressed by a fellow veteran journalist in an interview, that too in a court of law. A legitimate disagreement could have been conveyed by the newspaper in ink on its pages rather than slamming a legal notice demanding 500 crores and an apology in damages among other conditions.

It’s an hour of reckoning, for us in the media to question our integrity towards the profession. We cannot afford to be mere spectators in this clash of editors, in a democracy which associates sky-rocketing ethics and high moral standards with journalism.

In January this year, while inaugurating a book ‘The Tribune 130 Years: A Witness to History’ written by historian V N Dutta, Prime Minister Manmohan Singh, reported Indian Express, asked media to introspect suggesting a "degree of self-regulation”, identifying sensationalism, trivialization, prejudiced reporting and corruption as the new lows in the Indian media.

On the "inevitable highs and lows" in the media, Singh pointed out that there was "sensationalism, driven by a desire to sell a story at any cost... there are stories without a clear understanding of the underlined issues. There is reporting which is prejudiced. There is trivialisation of important matters. There is corruption. The prevalence of the practice of 'paid news' exposed recently has come as a shock to all right-thinking people."

Do we in the media conquer with these tough words from the Prime Minister who himself has been heading a Government which has come under severe criticism for corruption? Or, are we too idealistic to identify the new low we have touched?

Interestingly, Indian Express in its April 22nd edition ran a story on the expulsion of a member of a minority community from Team Anna for recording the core committee meeting proceedings without consent. The story was titled, “Muslim face out: ‘Team Anna biased’”. Didn’t the headline itself reflect an unethical approach in reportage?

Not many years ago, a little known city reporter of the Indian Express in a badly drafted e-mail revealed his plan to spread false rumours against me across media which would result, according to him, in my credibility going down. At that time as a sane young activist writer, I forwarded the e-mail to the Indian Express management, which acted on it in a just manner.

The editor, I was told later, was furious at the grammatical mistakes in the e-mail apart from its juvenile threatening nature. Have we come a long way?