Union law minister Salman Khurshid made a major blooper with his unnecessary comment that the pictures of the Batla House encounter brought tears to Congress president Sonia Gandhi’s eyes. After getting flak from his party, he retracted, saying he had only meant she became ‘emotional.’

For political commentators, a swift Congress strategy to lure the minority in the Uttar Pradesh elections was visible. While the comment may have been emotive for a significant part of the minority community, it raises the larger question of political discourse in India, where secularism merely has been glued to the paper of the Constitution. 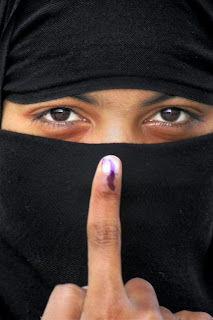 On September 19, 2008, in an encounter at Batla House, Jamia Nagar, Delhi, senior inspector Mohan Chand Sharma and two suspected Indian Mujahideen terrorists, Atif Amin and Mohamed Sajid, were killed while two other suspects Mohd Saif and Zeeshan were arrested. Another accused Ariz Khan managed to flee. Sharma, who was awarded the Ashok Chakra later, had played a crucial role in cracking the Parliament attack case.

On August 29, 2009, a bench headed by Delhi high court chief justice AP Shah rejected the plea of an NGO, Act Now for Harmony and Democracy, seeking judicial inquiry into the encounter. On October 30, 2009, in the Supreme Court, a bench headed by chief justice KG Balakrishnan dismissed the NGO’s plea challenging the earlier verdict. When the petitioner for the NGO, Prashant Bhushan, submitted that the encounter had shaken the faith and confidence of a large section of a community, the bench expressed its displeasure saying, ‘You need not identify any section of society... Criminals are criminals. Why do you identify a community?’

Identity and religion have run deep in the politics of India since Partition. As the controversy over the issue died, Congress leader Digvijay Singh found an opportune moment to raise it in Azamgarh, Uttar Pradesh’s minority hotbed on the eve of polls in Rahul Gandhi’s presence, saying that he always believed that the Batla House encounter was ‘fake.’

Home Minister P Chidambaram, saying there was no scope of reopening the case, called the encounter ‘genuine.’ If the Congress is keen to address the grievances of the Jamia Teachers’ Solidarity Association and other political outfits who’ve raised doubts over the encounter, why doesn’t the party bring consensus among their own leaders? Or, is the issue a deliberate attempt to cultivate an election recipe to milk the minority vote? Muslims too are human, not to be singled out as a vote bank.

The malady of this plank has corrupted the nature of political discourse in the country. Not far from this political game, a war has taken shape as a campaign over the internet, run by JTSA as a ‘fight against state and its agencies’, since ‘they refused a free and fair enquiry into the encounter.’

The JTSA theory of a ‘fake encounter’ hasn’t had many buyers. University of Delaware’s Director of Islamic Studies, Muqtedar Khan, slammed the ‘intellectually dishonest’ representatives of Muslims who ‘live in denial.’ ‘They first deny there is such a thing as jihadi terrorism,’ Dr Khan wrote, ‘resorting to conspiracy theories blaming every act of jihadi violence either on Israel, the US or India. Then they argue that unjust wars by these three nations (in Palestine, Iraq and Kashmir) are the primary cause for jihadi violence; a phenomenon whose very existence they have already denied.’

The Congress strategy in Uttar Pradesh has suggested a broader framework to ‘living in denial’. The party is following in the footsteps of the Samajwadi Party’s formula of minting votes through minority appeasement. It was seen when Khurshid announced a sub-quota for the minorities in Uttar Pradesh, demolishing the Election Commission code of conduct.

Will we remain entangled in this cynical web of politics? The political class — both ruling and the opposition — needs to introspect on the techniques being adopted in the system. There is certainly more to elections than winning votes.

Reservations as a policy for uplifting the backward sections haven’t been effective. Prof Purushottam Agrawal of the Jawaharlal Nehru University in 2006 presented the Multiple Index Related Affirmative Action as opposed to the reservation policy. While several academicians have supported the idea, the HRD ministry has remained ignorant till date. Congress leader Shashi Tharoor, who recently aired his support to the MIRAA framework on Twitter, may bring hope for the beginning of a solution.

In India, politics has to be rescued from the clutches of the skull cap and tilak. Religion has its sanctity, which should not be mixed with politics. The implicit non-secular planks in the name of secularism only go on to demonise democracy.

The writer is the India Editor of The Indian monthly published from Sydney, Australia.