Published in Mid Day
Three things cannot be long hidden: the sun, the moon, and the truth. - Buddha
In Kashmir there is no common truth. Every individual perhaps has a distinct version of truth. The conflict ridden valley, however has over the past two decades hidden one significant truth, that of the forced displacement of Kashmiri Pandits in 1990.

As India was inching towards reforms to transform its economic outlook in 1989, its northern-most state of Jammu & Kashmir faced a sudden violent rebellion from separatist groups who took up arms against the state machinery. While V.P. Singh took hold of the Prime Minister's Office (PMO) in December that year, situation had turned grave as terrorists aided by Pakistan began selectively targeting the minority Kashmiri Pandits.

The Pandits' story today is one of the tragic and often overlooked catastrophes of a conflict that has claimed thousands of lives, and forced hundreds of thousands from their native land into exile in their own country. 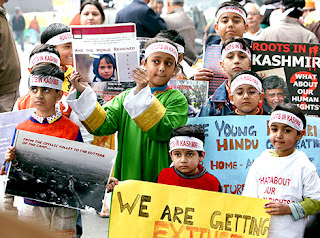 The roots of this tragedy are immersed in 1986 with a well-planned strategy to execute Hindus from the valley. By 1990, the population saw their age old temples turned to ruins and lives at risk.

Pakistan stepped up their campaign against India, new Islamist terror outfits swiftly mushroomed in the state; even as Jamait-e-Islami financed all madarsas to poison them against the minority Hindus and India, Pakistan further dictated youth to launch Jihad against India. A terror strike so meticulously planned that its unprecedented display was terrifying. The camps in Pakistan Occupied Kashmir (POK) began to provide training to innumerable Muslim men; India witnessed the emergence of the bloodiest Kalashnikov culture in the valley.

Almost after two decades of the exodus, the Abdullah family - who are politically the strongest family of J&K - broke their silence over the issue. Omar Abdullah wrote a detailed post on his official blog blaming the local Muslim population to be 'mute spectators' to the forced exodus.

On May 15th, 2008 Chief Minister of J&K Omar Abdullah, who back then was the president of the J&K National Conference, wrote in detail his views about the Kashmiri Pandits exodus. Excrepts: "It's so easy to say that we will lay down our lives to bring Kashmiri Pandits back to the Valley and I appreciate the sentiment as I am sure the Kashmiri Pandits reading it will. Pity that sentiment was missing when our mosques were being used to drive these people out."

"None of us was willing to stand up and be counted when it mattered. None of us grabbed the mikes (microphones) in the mosques and said 'this is wrong and the Kashmiri Pandits had every right to continue living in the valley."
"Our educated, well-to-do relatives and neighbours were spewing venom 24-hours a day and we were mute spectators either mute in agreement or mute in abject fear but mute nonetheless."
"And talking about mosques -- what a great symbol of mass uprising they proved to be. While I can't claim to have lived through it I have enough friends who did and they tell me about the early 90's where attendance was taken in mosques to force people to pray."
There has been a persistent silence over the issue of the Pandits' exile in the lofty corridors of power in New Delhi. The revolutionaries in the Human Rights camp too have conveniently ignored the hapless community. On the other hand, the comparatively free press, at least free of ideological compulsions, has rendered lip-service to the ethnic minority community of Kashmir. In this process, history may have been led to erase one of the most haunting chapters from its custody.
"Kashmir should get Azadi (freedom) from bhookhe-nange (starving-naked) Hindustan (India)," said Arundhati Roy, seen by many as a champion on 'human rights', at a seminar in New Delhi in October 2010 where a Maoist frontline group Committee for Release of Political Prisoners (CRPP) hosted Kashmir secessionist leader Syed Ali Shah Geelani. The seminar which was conducted few kilometers away from the Parliament of India saw sudden clash between people protesting against the speech of Roy and police. Almost eight people including Roy and Geelani were booked for inciting violence by a Delhi Court later.
Human Rights groups in India, mostly tilted towards left have remained silent on the displacement of Pandits or demanding justice for the acts of violence perpetuated against the community. People's Union for Civil Liberties, one of the oldest Human Rights groups existing in India went on to make sweeping statements and vague conclusions on the forced displacement of Kashmiri Pandits.
Manoj Joshi, senior journalist, writes in his book The Lost Rebellion - Kashmir in the Nineties, "In an article in The Times of India, Harish Khare rightly blamed the entire 'secular establishment' for turning 'its back on the Hindu migration from the valley'. Indeed, its most extreme, the PUCL, went out of its way to skew testimony to prove that Jagmohan had engineered the migration, ignoring the brutal rapes and killings that preceded it."
Former National Vice-President of PUCL, Yogesh Kamdar denies such an occurrence, "I do not think PUCL ever believed that one individual (Jagmohan) and his "propaganda" can result in the migration of lakhs of people in such a short span of time and lasting so long. Holding such a view implies that the victims lacked basic intelligence and common sense."
On the Pandits' plight, he says the media and the human rights groups have "unfortunately remained muted all through. In my opinion it is largely due to the desire to assume politically correct postures (rather than to be true to one's brief). And sadly, there has not been adequate attempts of introspection by either of them."
"I protested against the deception and distortion of the so-called human rights bodies like People's Union for Civil Liberties. I was not listened to; rather I was run down by the members of the present day ruling-party who cited false and motivated reports of these bodies in the Parliament," writes the than Governor of J&K, Jagmohan in his book The Frozen Turbulence citing several reports of the PUCL ignoring plight of the Kashmiri Pandits.
The exodus of Pandits, largest forced migration since partition of India, is a bitter saga in the modern day history. It is seldom repeated on news-channels and newspapers as are the anti-Sikh riots of 1984 in New Delhi, the Babri Masjid demolition of 1991 and the Gujarat riots of 2002. Even though several hundred temples continue to remain desecrated in the Kashmir valley and an entire community waiting for the wheels of justice to move, not much is expected more than two decades after their forced displacement.
Will Government of India prosecute those responsible for the exodus of the community? Will the Kashmiri Pandits return to their homeland? Or, will the community remain in exile, at home?
"Freedom became a prison for the exiles", wrote Siddharth Gigoo, author of The Garden of Solitude, first-ever novel on the exodus of Pandits. Perhaps, the Pandits will remain confined in the prison.
Aditya Raj Kaul is the India Editor of the monthly The Indian published from Australia. The article is an excerpt from the research, 'The Forced Displacement of Kashmiri Pandits - Myths & Half Truths' conducted for the Xavier Institute of Communications, Mumbai. Kaul blogs at activistsdiary.blogspot.com and can be reached at kauladityaraj@gmail.com
Posted by Aditya Raj Kaul at 4:08 PM