From 'Sexy Insurgency' to 'Writing Revolution'

Originally published for The Indian, Australia. Reprinted for Afternoon Despatch & Courier, Mumbai, India
“Who is on the Maoist side? Who is on the side of the State?
And it is the ordinary tribals who are getting stuck in this war between the Maoists and the State. Reporting from conflict areas is always hard.” - Rahul Pandita 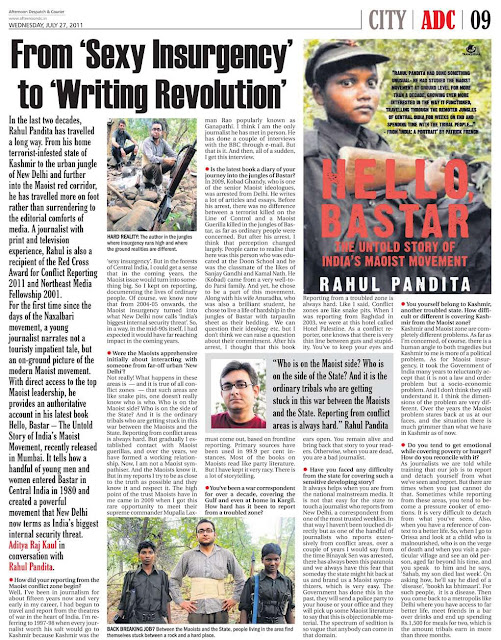 In the last two decades, Rahul Pandita has travelled a long way. From his home terrorist-infested state of Kashmir to the urban jungle of New Delhi and further into the Maoist red corridor, he has travelled more on foot rather than surrendering to the editorial comforts of media. A journalist with print and television experience, Rahul is also a recipient of the Red Cross Award for Conflict Reporting 2011 and Northeast Media Fellowship 2001.

For the first time since the days of the Naxalbari movement, a young journalist narrates not a touristy impatient tale, but an on-ground picture of the modern Maoist movement. With direct access to the top Maoist leadership, he provides an authoritative account in his latest book Hello, Bastar – The Untold Story of India’s Maoist Movement, recently released in Mumbai. It tells how a handful of young men and women entered Bastar in Central India in 1980 and created a powerful movement that New Delhi now terms as India’s biggest internal security threat. Aditya Raj Kaul in conversation with Rahul Pandita.

How did your reporting from the Maoist conflict zone begin?
Well, I’ve been in journalism for about fifteen years now and very early in my career, I had begun to travel and report from the theatres of war in the heart of India. I’m referring to 1997-98 when every journalist worth his salt would go to Kashmir because Kashmir was the ‘sexy insurgency’. But in the forests of Central India, I could get a sense that in the coming years, the Maoist issue would turn into something big. So I kept on reporting, documenting the lives of ordinary people. Of course, we know now that from 2004-05 onwards, the Maoist insurgency turned into what New Delhi now calls ‘India’s biggest internal security threat’. So, in a way, in the mid-90s itself, I had expected it would have far reaching impact in the coming years.

Were the Maoists apprehensive initially about interacting with someone from far-off urban ‘New Delhi’?
Not really! What happens in these areas is  — and it is true of all conflict zones  — that such areas are like snake pits, one doesn’t really know who is who. Who is on the Maoist side? Who is on the side of the State? And it is the ordinary tribals who are getting stuck in this war between the Maoists and the State. Reporting from conflict areas is always hard. But gradually I established contact with Maoist guerillas, and over the years, we have formed a working relationship. Now, I am not a Maoist sympathiser. And the Maoists know it. But in my reports I try to be as close to the truth as possible and they know it and respect it. The high point of the trust Maoists have in me came in 2009 when I got this rare opportunity to meet their supreme commander Mupalla Laxman Rao popularly known as Ganapathi. I think I am the only journalist he has met in person. He has done a couple of interviews with the BBC through e-mail. But that is it. And then, all of a sudden, I get this interview.

Is the latest book a diary of your journey into the jungles of Bastar?
In 2009, Kobad Ghandy, who is one of the senior Maoist ideologues, was arrested from Delhi. He writes a lot of articles and essays. Before his arrest, there was no difference between a terrorist killed on the Line of Control and a Maoist Guerilla killed in the jungles of Bastar, as far as ordinary people were concerned. But after his arrest, I think that perception changed largely. People came to realise that here was this person who was educated at the Doon School and he was the classmate of the likes of Sanjay Gandhi and Kamal Nath. He (Kobad) came from a very well-to-do Parsi family. And yet, he chose to be a part of this movement. Along with his wife Anuradha, who was also a brilliant student, he chose to live a life of hardship in the jungles of Bastar with tarpaulin sheet as their bedding.  We can question their ideology etc. but I don’t think we can raise a question about their commitment. After his arrest, I thought that this book must come out, based on frontline reporting. Primary sources have been used in 99.9 per cent instances. Most of the books on Maoists read like party literature. But I have kept it very racy. There is a lot of storytelling.

You’ve been a war correspondent for over a decade, covering the Gulf and even at home in Kargil. How hard has it been to report from a troubled zone?
Reporting from a troubled zone is always hard. Like I said, Conflict zones are like snake pits. When I was reporting from Baghdad in 2003, we were at this hotel called Hotel Palestine. As a conflict reporter, one knows that there is very thin line between guts and stupidity. You’ve to keep your eyes and ears open. You remain alive and bring back that story to your readers. Otherwise, when you are dead, you are a bad journalist.

Have you faced any difficulty from the state for covering such a sensitive developing story?
It always helps when you are from the national mainstream media. It is not that easy for the state to touch a journalist who reports from New Delhi, a correspondent from one of the most trusted weeklies. In that way I haven’t been touched directly but as one of the handful of journalists who reports extensively from conflict areas, over a couple of years I would say from the time Binayak Sen was arrested, there has always been this paranoia and we always have this fear that someday the state might hit back at us and brand us a Maoist sympathizers, which is very easy. The Government has done this in the past, they will send a police party to your house or your office and they will pick up some Maoist literature to say that this is objectionable material. The spectrum of sedition is so vague that anybody can come in that domain.

You yourself belong to Kashmir, another troubled state. How difficult or different is covering Kashmir from the Maoist zone?
Kashmir and Maoist zone are completely different problems. As far as I’m concerned, of course, there is a human angle to both tragedies but Kashmir to me is more of a political problem. As for Maoist insurgency, it took the Government of India many years to reluctantly accept that it is not a law and order problem but a socio-economic problem. And I don’t think they still understand it. I think the dimensions of the problem are very different. Over the years the Maoist problem stares back at us at our faces, and the situation there is much grimmer than what we have in Kashmir as of now.

Do you tend to get emotional while covering poverty or hunger? How do you reconcile with it?
As journalists we are told while training that our job is to report and detach yourself from what we’ve seen and report. But there are times when you just cannot do that. Sometimes while reporting from these areas, you tend to become a pressure cooker of emotions. It is very difficult to detach from what you’ve seen. Also,
when you have a reference of context to a better life. So, when I go to Orissa and look at a child who is malnourished, who is on the verge of death and when you visit a particular village and see an old person, aged far beyond his time, and you speak  to him and he says, ‘Sahab, my son died last week’. On asking how, he’ll say he died of a ‘disease’, ‘bookh ka bhimaari’. For such people,  it is a disease. Then you come back to a metropolis like Delhi where you have access to far better life, meet friends in a bar over drinks and end up spending Rs.1,500 for meals for two, which is the amount tribals earn in more than three months.
Posted by Aditya Raj Kaul at 1:29 AM

Do you want to watch Spy Kids 4: All the Time in the World full movie online? It is not released yet but you can watch it online already!

Click here to [url=http://watch-spykids4allthetimeintheworld-online.com/]watch Spy Kids 4: All the Time in the World online[/url]

Do you want to watch Final Destination 5 full movie online? It is not released yet but you can watch it already!