The hour I got stoned 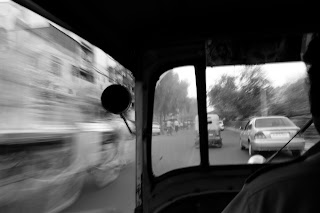 Blurred Busy Street
In search of my own self I wander still. I wander around the busy streets of the city in light and on the narrow empty pathways in darkness. I haven’t found myself still. My reflection plays with me, mimicking my own self. It holds me tight once for a while and releases me as soon as I move out and run in search again. This circle of my existence and exploration continues in a roundabout.

With a chilling wave across my body I found myself on a pavement bench on a busy market-street in the city. My body had never felt so light. It was late afternoon and the sun was bright on this summer day in Delhi. I enjoyed the heat, the rays of the sun as they fell on my face, tearing across drops of sweat. It was heaven or even better.

The early morning exam in the college had finally given me a chance to pamper myself. I had roamed around the streets and at friend’s place doing everything they did; following their routine of good and the bad. It never happened as I had imagined. Rather I never imagined I’ll be stoned to a blurred vision and almost loss of memory into just a couple of hours. The squares appeared triangular while the rectangular appeared shapeless. It did circles around my mind. Circles with high frequency juggling around. I had however managed my way out early and followed my daily commuting pattern unknowingly. I found my way after a long journey finally at the bench on the pavement on the busiest market in the city. I was safe but without my senses in control. I was high. Or even higher than I expected ever to be. I didn’t realize it then. Maybe I shouldn’t have and I didn’t.

In-between sun rays, my mind circled exploring around for love, hate and life. Life had been there and lay still within me. It was, but had it a reason to move on I wondered away. Hate wasn’t there. It wasn’t visible unless even if it was blur to my vision. Love was there I suppose. Even in that blurred vision, in that senseless body I found love. Love in my life, love in myself. Wonder where did it vanish suddenly now that I’ve been in senses for a while, my love?

The hour long stay on that bench had moved me drastically. The hour I got stoned. It had put myself in front of me open. My wandering self in search, was over for sometime. Only to begin soon yet again. Myself that I had found had disappeared minutes after I gained my senses.

Since I’ve again been in waiting; wandering across the city, measuring its long roads again. I’ve been helpless in my search. The hours have only grown into further many hours. The days have given way to darkness in hope for me. The darkness in return has assured me of a new tomorrow with a new beginning. The crack of dawn with its first light and fresh fragrance awaits me. I wait for myself in hope. In hope for the same love. Senseless love.
Posted by Aditya Raj Kaul at 12:55 PM

very nicely written - but i have to say - seems like a page out of Dev D's script :-) Hey dont get me wrong i loved the movie :-)

It does sound like a page out of Dev D. You've put the stoned experience very well. You are any way a good writer, even without the stoning help...

I can very well understand...
add up what happend later... how do u feel nw... was it wrth an adventure or not.. GUD job

I like it when you decide to transfer the little, subtle and abstract things of your life to the concrete written word. The transition is beautiful of course, this time deeper, more thoughts than words....
something that adds to your writing palette.

a write up that has the tenacity to take anyone into a trance and so it did to me, sir. we all, at various times in our too busy lives, get stirred by the knock of a stone and dissolve into a deeper meaning of life, not the one that we live usually for!!!!!
grrreat portrayl of those moments sir, keep doin that....

i would term it as a derealization phenomenon!!!aditya,u can wiki that.....cheers