I haven't been writing on the blog for long. Though I couldn't think of a reason strong enough to mention for this but maybe I have been a bit too occupied with college, newspaper writings and to top all reasons 'friends' (read:friend!). In last few months I earned some new friends (read this as friends!) and discovered some new ideas to explore in the times to come. I even drove straight to 'Neemrana' in Rajasthan for a day long trip with friends recently.

Last week, I was done with my college internals and now plan to get back to writing and as usual reading books which I've piled for days and kept in a strange order of sequence on my bookshelves. For days I've been thinking to write, write and write here...but sometimes the brain can just not 'zero in' on a subject. A subject, so different, so challenging and yet so simple, yet so common. This is just that time which people term as '..one of those days' when mind is in constant warfare within; with thoughts contradicting thoughts and much more happening inside me. What I could however come down to and know well enough was that I've a strange habit of writing during 'nights' or rather 'in dark'.

After days of procrastination from a friend, I had to bow and get on to writing yet again. Not to satisfy the said friend's wish alone, but for myself; for me to get better each day with writing skills. It was 19th last Monday, and I completed 19 years in exile, quite strange but even I'm 19 years old.

'..19 years ago I was - 19 years after I still am - but 19 years I lost..'
Thought of sharing an article I wrote for my Campaign Blog here. It is reproduced below. It was very encouraging to see storm of comments and a debate being generated on my writing. Few others also thought of re-publishing my brief piece at the following links :

and here it goes..

I wake and feel the fell of dark, not day
What hours, O what black hours we have spent… 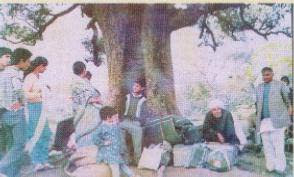 I love your writing.........pls keep writing and i agree with every bit you have written

long back it was morning of january,90 when i entered jammu bus stand and cudnt guess why so many of kashmiri pandits hav jumbled up there, some sitting, few strolling in vain and many holding little crying kids.Being a dogra child, it was always some excitement and unusual to find a kashmiri pandit in jammu those days especially in pherons and i always wondered how they were so fair and red cheeked.
little, i knew then that soon the pheron shall disappear from the wardrobes of pandits and there wont be the same curiosity to find them in jammu.
it was years later that i realized the reason behind that rush on jammu bus stand, it was migration as the word went around and forceful exodus as any sane idian shall put it.
great work adi sir!